We can help you expand your airsoft business. SPECNA ARMS is more than just a product.

We provide services in 7 languages

We believe in effective communication and that is why we cooperate with our partners in 7 languages, including English and Spanish.

A favorable profit margin that takes into account the customer's earnings

High margins and accurately managed partner sales channels make the SPECNA ARMS brand products not only satisfying for the customers but most of all profit for partners.

Adapting to the needs of the local market

At every stage of the order processing, we take care of professional and market-compliant preparation of products, so that our partners have no problems with legally introducing them to sale.

We assist in the product selection process, taking into account local statistics and the local specificity of the market.

Our strength is data. For 16 years, we have been accumulating information about markets and user preferences, so we will be happy to help you choose the most promising products to reduce any risk.

We produce to your order

The success of the SPECNA ARMS brand was based on a flexible approach to products and market requirements. For our Partners we offer over 500 products so that they can strengthen their position on the market more effectively.

A globally recognized brand with its own active marketing background

Thanks to our extensive facilities, we can conduct marketing campaigns that build awareness and the demand for brand products among end customers. To this end, we use influencers and proven forms of cooperation with the community. 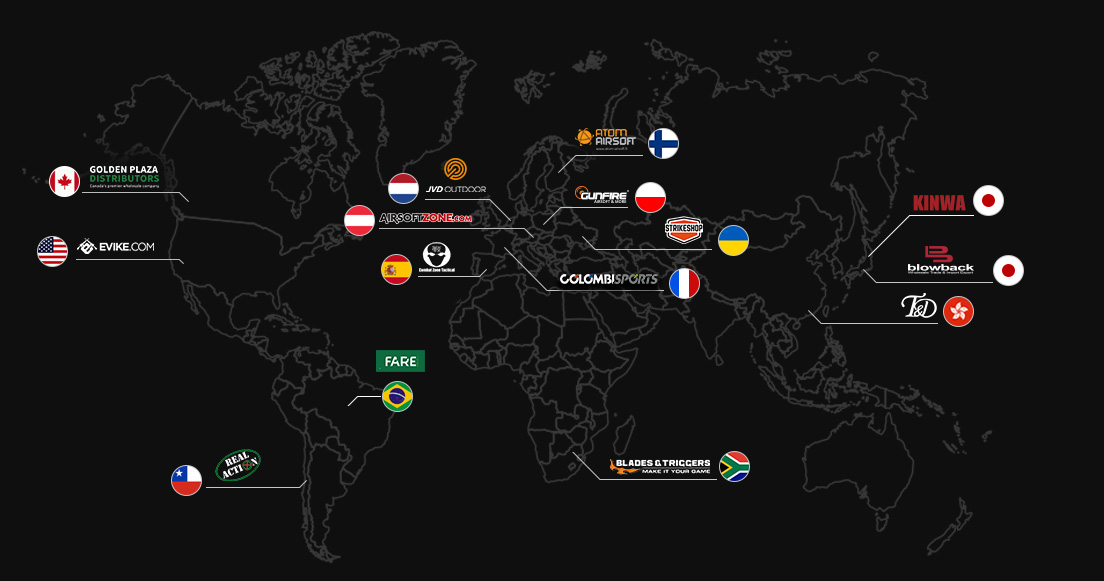 A financially stable partner with years of experience in the market

Completely independent of external financing, for 16 years we have been a stable partner for companies from all over the world.

Guarantee of contact in 24 hours, despite different time zones

We have gained the trust of our partners thanks to our constant availability of contact, regardless of the time zone.

Technologically advanced production processes enable us to deliver the highest quality products with one of the lowest return rates.

FOR BUSINESS INQUIRIES WRITE TO
SALES@SPECNAARMS.COM

One of the most important events of the military industry and for all firearms enthusiasts is just around the corner. The newest edition of the SHOT Show, which is considered not only one of the best conventions for weapons manufacturers and outdoor equipment but is also in the top 25 of the best conventions - among all organized in the United States - will be having its next installment this year. This is the last call to apply for your participation in the SHOT Show 2023 and if you own a business in the above-mentioned industries, you should do it right now. It's worth it!

SHOT Show history. How it all started?

Before we move on to this year's convention, it is worth winding the clock back a few years and presenting the high-ranking status of this event. The first SHOT Show took place in the year 1979 in St.  Louis, Missouri. Since then, it has been organized regularly and each year the number of participants has increased significantly. The first edition of the SHOT Show was attended by less than 6,000 people, and in recent years this number skyrocketed to 40,000 - 60,000 participants. The only exception is 2020 when due to the pandemic, the convention was canceled.

In St. Lois, the very first convention took place, and the next ones were organized in cities such as San Francisco, Atlanta, Orlando, Las Vegas, Dallas, and Houston. Since 2010, the SHOT Show has been held exclusively in Las Vegas and will remain so until 2027.

SHOT Show - what does the name of the convention mean?

SHOT Show is the abbreviation for Shooting Hunting and Outdoor Trade Show. This name includes a description of all industries whose representatives can participate in the convention.

The SHOT Show has been organized by the National Shooting Sports Foundation (NSSF). This organization is the owner and the largest sponsor of the event. Its main goal is to promote recreational and sports shooting. The National Shooting Sports Foundation also puts a lot of emphasis on gun safety and education, as evidenced by the NSSF's SHOT University Online. It is an e-learning platform where various types of online courses are available for business owners and their employees.

The SHOT Show is the largest convention of this type in the world - next to IWA & OutdoorClassics, which is organized in Nuremberg. It is worth noting that they are not open to the general public. Not everyone can take part in them - only the official representatives of the shooting, hunting, and outdoor industry, i.e. weapons and tactical accessories manufacturers, as well as commercial intermediaries who sell such products, are allowed to attend the event. Anyone wishing to participate in the convention must register in advance and send the relevant documents confirming their activity in the above-mentioned industries.

This year's SHOT Show will take place in Las Vegas, Venetian Expo, and Caesars Forum, and will last from January 17 to 20. However, the accompanying events, such as the NSSF/HAVA Golf Classic, are organized earlier. This is a charity golf game that raises funds for disabled war veterans and will take place on January 16.

What will be the attractions this year?

The SHOT Show is a unique opportunity to meet people from the industry and learn about new products offered not only by large arms manufacturers but also the lesser-known ones. Companies from all over the world participate in them, and you might never have heard of some of them if it wasn't for the event. It is an ideal opportunity to establish new contacts, which may even lead to further cooperation and business opportunities. It’s made easier thanks to additional events, such as concerts, business dinners, and meetings, which are organized in their free time, independently from the convention. If you are planning to take part in the convention, you definitely cannot afford to miss the Specna Arms airsoft guns - one of the leading manufacturers of airsoft firearm replicas.

SHOT Show is not exclusively about weapon manufacturers presenting their older and newer models. It is also an opportunity to see their airsoft guns. They are an excellent alternative for any firearm enthusiast since they are a safer and easier to obtain alternative - in many countries we do not need permits to buy an airsoft gun. At the same time, thanks to the high detail and craftsmanship they faithfully imitate real firearms, and the best example are the Specna Arms products. We specialize in assault rifle airsoft guns, the high quality of which is well-known and appreciated in the airsoft community. The brand offers more than 150 different models, which are divided into two main lines: CORE and EDGE. Both of these series are characterized by the use of slightly different technological solutions that can meet the expectations of even the most demanding user. Assault rifle airsoft guns are not the only airsoft models on the market. In addition to them, there are also airsoft shotguns, revolvers, sniper rifles, and machine guns, as well as pistol replicas.

Check out what airsoft guns we will present this year

Each participant of the SHOT Show 2023 will have the privilege of checking out our Daniel Defense® MK18 SA-E19 EDGE™ assault rifle airsoft gun, which was manufactured in cooperation between Specna Arms and the American EMG Arms brand. Licensed Daniel Defense® markings are engraved on the receiver, and it comes installed with a reinforced gearbox, MOSFET X-ASR module from the Polish brand GATE, and the ESA™ quick spring change system. The MOSFET module ensures the safety of the internal components, extends the longevity of the electronics and battery, and allows for better trigger response. Thanks to the quick spring change system, the power of the replica can be easily adjusted to the conditions on the playing field. External parts of this model are covered with Nano Coating, which increases the rifle's scratch resistance.

As you can see, an airsoft gun can prove to be almost as technologically advanced as a real firearm. Specna Arms aims not only at increasing the functionality of airsoft guns on the battlefield but also at providing users with a large dose of realism and immersion. Thanks to this, airsoft guns can be used in field games that are intended to simulate real military operations.

SHOT Show 2022 - how did the previous edition look like?

If you're still wondering whether to take part in this year's event, it might be worth mentioning SHOT Show 2022 for a moment. On the organizer's website, you will find materials from the previous edition and get acquainted with the manufacturers who have participated or are currently participating in them. Many brands also run their film coverage of the convention, which can then be viewed online. It's a good way to experience first-hand what kind of atmosphere is at a SHOT Show event and how many opportunities it can provide. It is also an ideal opportunity for firearms enthusiasts who are not professionally related to the industries for which the event is directly organized. Thanks to the footage mentioned above, they can feel as if they were also there.

All of the participants of this year's edition of the SHOT Show are invited to the Specna Arms stand, where you will be able to get acquainted with our airsoft guns. We will present the models of which we are proud the most and which can be confidently recommended to every firearms enthusiast. They can provide a similar amount of excitement as shooting real firearms, and at the same time, they can be safely used in any simulated combat environment. We will be happy to answer your questions and present our Specna Arms products, so find our stand on the map right now and meet us at SHOT Show 2023!